Our Studio Resident, Julia, embraces the accidents that can happen with letterpress and even incorporates them into her exhibition! She has been using a free-style, “mad libs” approach to her work: combining words, shapes and visuals from the Book Arts drawers to tell the story of the baby bunny that might live. 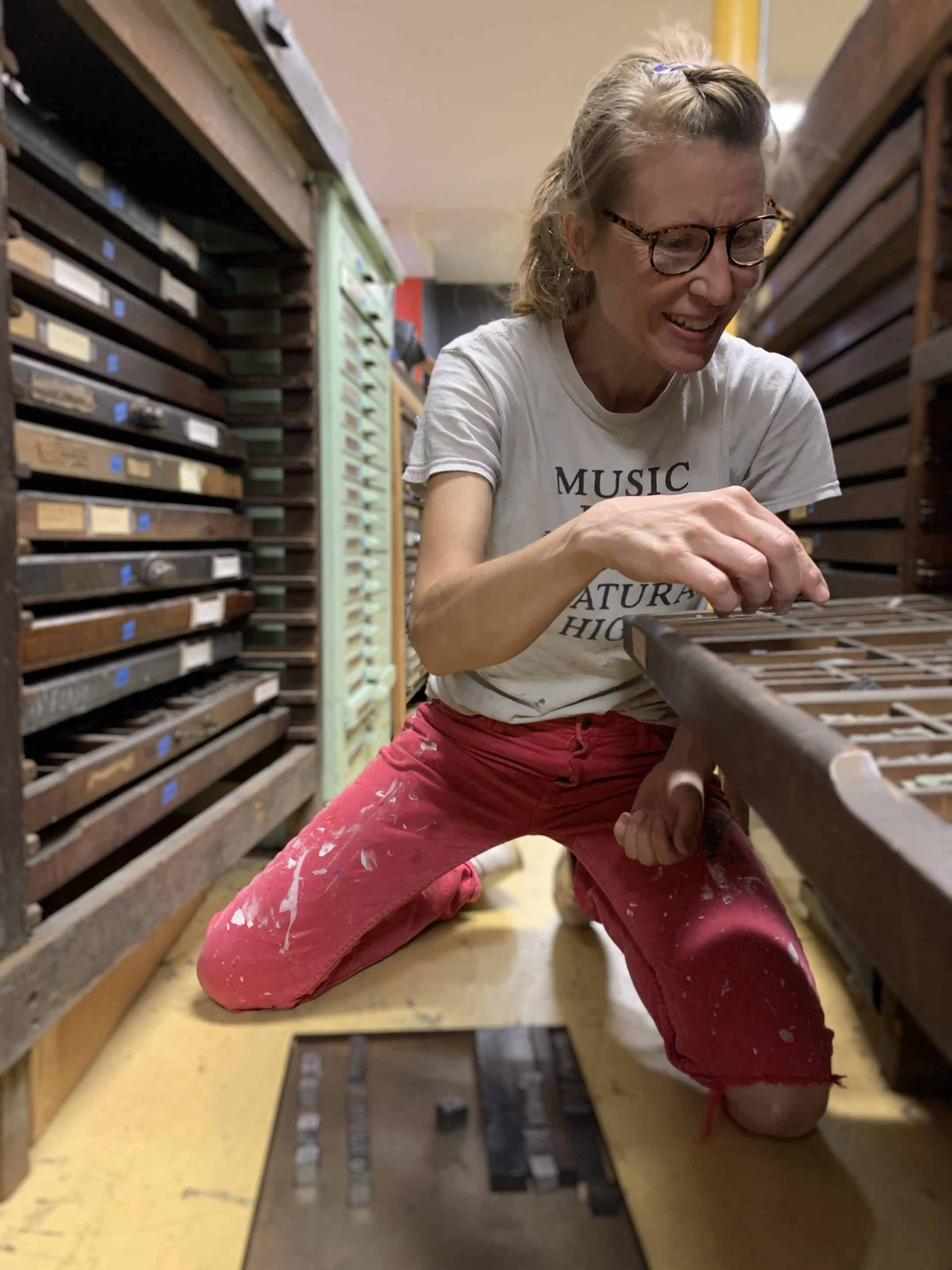 How did you get involved with Book Arts?

I took a screen printing class and fell in love with the vibe there. It’s a lively and down to earth place. There’s usually someone else, often many people making things in the downstairs workshop zone. I like the shared atmosphere and just wandering around, seeing what others are up to, what’s on the drying racks, in the recycling pile, and on display in the store and the galleries.

Can you tell me about the title of your exhibition?

It was something I wrote down the morning after a friend and I saw a bunny being hunted by a cat. I’d already decided to go with a “mad libs” approach to the show as a whole. This meant leaving certain blanks in the prints that I could fill in later with freehand drawing. I thought the title would lend itself to this way of working so, for example, there’s a series of prints with the phrase “BABY BUNNY MIGHT ______.” It’s a loose structure for dreaming up what this bunny might do or be or become.

Your work often blends different forms of media, how do you go about choosing these pairings?

My drawings tend to be simple, even sparse. They’re just paint on paper. I wanted to try something different during the residency, something more baroque and layered. It’s been a process of trial and error. I basically walk around the print studio until something catches my interest. Yesterday it was two large wooden plates that must have been used to create score cards or accounting charts. They’re slightly different grids and I printed them side by side in two different colors. They look a little like apartment buildings so maybe I’ll run with that and turn them into two competing hotels for rabbits.

How did you incorporate the equipment and offerings in the Book Arts studios into your work?

I decided to focus on letterpress printing since I’d never done it before and the Book Arts Center has a treasure trove of material to work with. There are whole drawers of buildings, flowers, food and stars. There’s even a drawer of people’s signatures that I hope to incorporate somehow. I spent the better part of the residency just getting to know what was there and trying things out. You can’t really tell what a particular cut will look like until you ink it up and print it. I’ve been using the manual press which allows for a looser, more improvisational approach. Letterpress traditionally requires tons of advanced planning and finessing of all the elements into a tight grid. Instead of meticulous typesetting, I’ve been using magnets to hold the elements in place. I can move them around, swap different cuts in and out, ink up different sections with different colors.

Visual and intellectual pleasure… and maybe some laughs?

What was your biggest takeaway from your residency with Book Arts?

An appreciation of how thoughtful and intricate the letterpress system is. There’s a meticulousness to it that’s very satisfying. Even the way the elements are stored has been carefully thought out to make the typesetter’s job go as smoothly as possible. Although my approach was more playful and spontaneous, I enjoyed just being in the presence of this system and being able to experiment with it.

“I wanted to try something different during the residency, something more baroque and layered.”