Located in the heart of downtown Buffalo, the Western New York Book Arts Center is a community print shop and studio for letterpress, screen printing, book binding, paper making, calligraphy, origami, and more! We are a nonprofit organization and a working museum dedicated to preserving the book arts through collaboration and innovation, bridging antique equipment and processes with modern artmaking techniques, and celebrating the heritage of Buffalo’s’ printing industry. We are proud to act as a hub to create and foster a collaborative community by providing opportunities to artists and educators, and all those in creative pursuits.

We believe that the book arts are for everyone, no matter your age or skill level. When you visit us for a hands-on workshop, to view an exhibition in our gallery, or to browse our shop of artist-made goods, we will be happy to share all of our book arts knowledge in an accessible way. Whether you are exploring a creative curiosity, honing your skills as a working artist, seeking professional development or planning a class outing as an educator, or interested in the storied past of book arts as a history buff, we will always meet you where you are in your book arts journey with the right amount of information and support for your project.

At Book Arts, we strive to create meaningful opportunities for artists. In our gallery, you will find a rotating series of exhibitions in a variety of mediums. Whether an artist is showing their first collection or boasting many years of experience in their field, we are excited to provide this venue for their work. In our retail store, we are proud to support over 100 local makers by selling their wares at one of the lowest consignment rates in the region. The Book Arts Shop is also Downtown Buffalo’s only destination for artist materials and supplies. No matter what your skill level, Book Arts can provide you with the tools for your next project.

We are so grateful for the support of our community since we got our start as an artist collaborative in 2006, and we look forward to serving the Western New York community for many years to come! 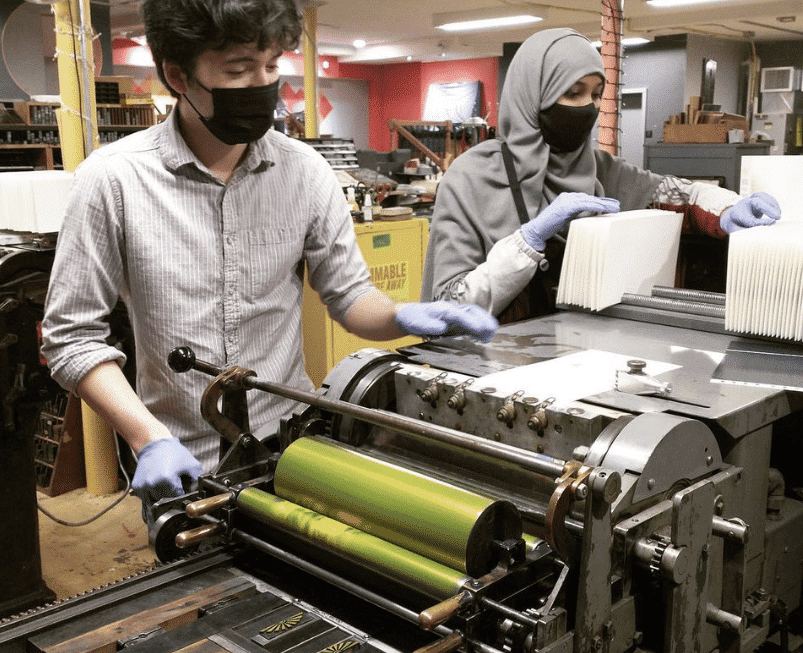 The Western New York Book Arts Center promotes greater understanding of printing and book-related arts through education, creation, and exhibition for a broad and diverse community.

Founded in 2006 by Richard Kegler and Carima El-Behairy, the Western New York Book Arts Center was originally known as the Western New York Book Arts Collaborative before we found our home at 468 Washington Street. After formally becoming incorporated as a 501(c)3 nonprofit organization in 2008 and purchasing our building shortly thereafter, we started to be known as a center even though collaboration is still at the heart of our mission—and on our paperwork, too! 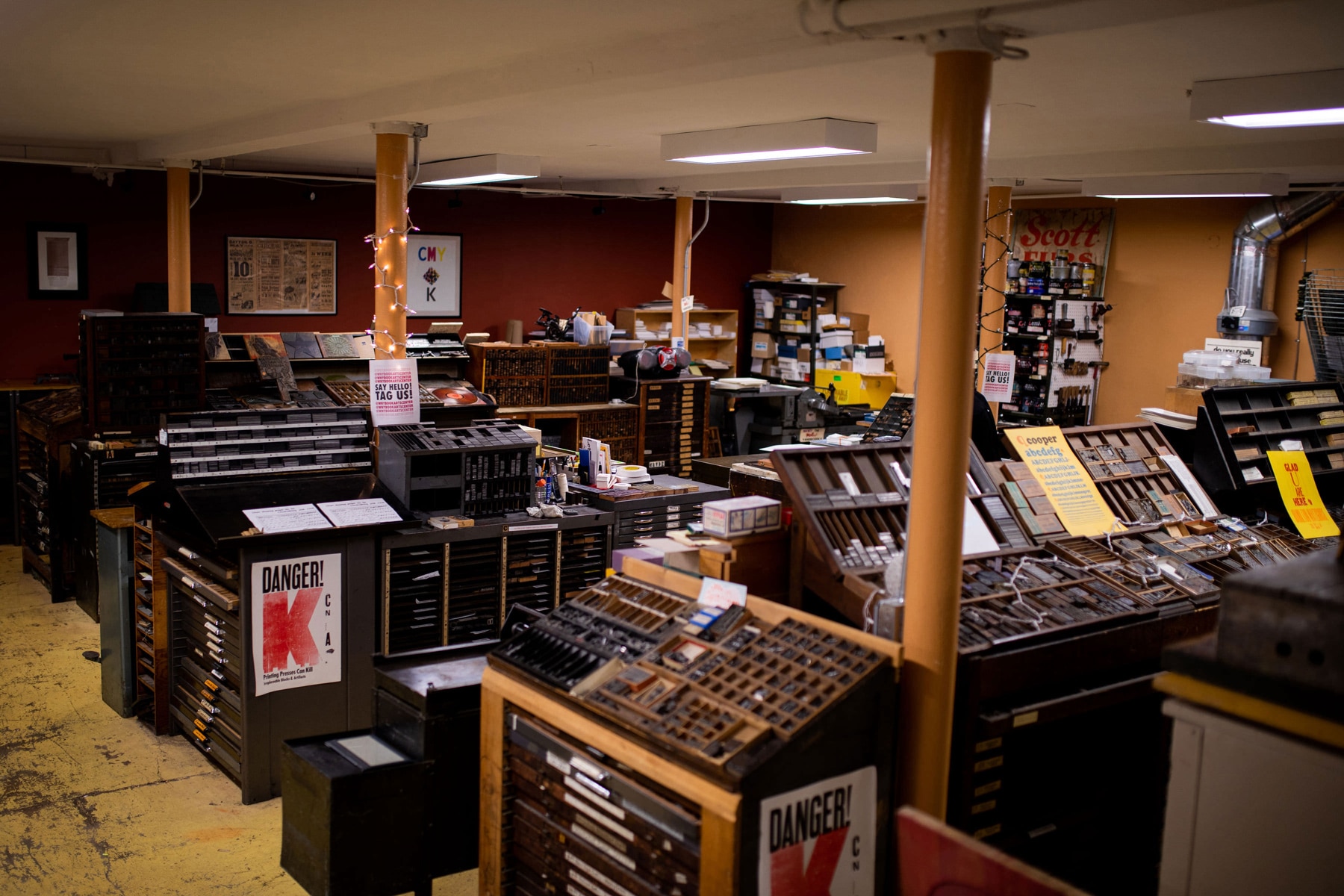 In 2008, Buffalo had not yet been showing signs of a resurgence, but as an organization built by artists we were not afraid to roll up our sleeves and work hard to make our space a destination for makers and tourists alike. It was no small feat moving several presses that each weigh a literal ton into our lower-level studio, along with huge collections of wood and metal type, but with a little ingenuity and a lot of elbow grease the print studio at Book Arts was born. Renovations to our ground-level gallery and workshop space followed, which gave us more than 6,000 sq. ft. of refreshed space.

Just like printmaking itself, Book Arts has experienced a lot of exciting and innovative changes over the years, but visitors note the familiar scent of ink and hum of printing presses that stand the test of time. We are proud to be the stewards of an art form that has contributed to Buffalo’s rich history as both a creative practice and an industrial livelihood, and built the foundation for many of today’s digital imaging technologies, for many generations to come.

The Western New York Book Arts Center strives to create creative spaces that affirm the dignity of all citizens within the local and wider regional community we serve. We commit to continuously educating ourselves and our community of artists, students and patrons about the privileges and oppressions that people are subjected to, based on their race, class, age, disability, gender expression, nationality, age, faith, health, and socio-economic status.

We are proud to be the stewards of an art form that has contributed to Buffalo’s rich history as both a creative practice and an industrial livelihood, but we also recognize that systemic racism and oppressive power structures have contributed to that success. Book Arts staff and board are committed to the intentional and proactive pursuit of an anti-racist work and programming environment in which all people are given opportunity and celebrated for their unique perspective and individual talents.

The Western New York Books Arts Center was established as an artist collaborative, working inclusively with artists and community members towards shared aims and values. In this spirit, we commit to the development of exhibitions and discussions, created in collaboration with a diverse community of artists and curators, that aim to understand the historical forces, root causes and conditions that make our present moment, personal experiences and worldviews possible.

History of the Book Arts: An Artform

So, what are the book arts? When we’re talking about book arts, we are referring to the creative and craft disciplines used to produce the structural elements of a book, such as printmaking, paper-making, calligraphy, origami, and bookbinding. The book arts in their varied forms have existed for thousands of years, dating back to ancient Egypt, China, Japan, Korea, and even Mesopotamia.

Fast forward to the 1400s when Johannes Gutenberg invented the first mechanical device that applied ink to paper from metal type, allowing him to create multiple copies of bodies of text, making the sharing of information easier and faster than ever. This invention dramatically reduced barriers to access for a wide range of books and documents, created a sharp increase in literacy, and radically changed the social landscape since one no longer needed to be wealthy or privileged as clergy in order to learn about legal, religious, and political happenings.

Printing presses were eventually made more efficient as the history of industrialization marched on; presses were first powered by belt systems that ran on steam engines, and later powered by electrified motors. It didn’t take long for printing press technology, no matter how rudimentary, to spread throughout all of Europe and eventually make its way to Benjamin Franklin in Philadelphia. Fast forward again to the late 1800’s, and printing found its way to Buffalo, NY.

Buffalo has a rich and storied history in printmaking. Did you know that Willis Carrier invented the air conditioner here in 1902 as a way to reduce heat and humidity in a print shop? Back in its heyday of the late 1800s and early 1900s, Buffalo, along with other major cities, had a robust printing industry including substantial operations for commercial and artisan printing like The Buffalo News, The Courier Co., The Roycroft, Gies & Co., and many more.

In the 1960s, the book arts began to experience explosive growth in commercial printing. Typesetting was an important industrial occupation in the golden age of advertising, where images and type were now being used to tell stories in applications besides newspapers. Today, the history of printing in Buffalo lives on as both a commercial and a craftsman’s movement. You can see it in the former print shop at the Roycroft Campus, and in the design of Winchell, the first typeface ever designed in Buffalo. Vandercook printing presses like the ones once used to print daily newspapers are preserved at studios like Book Arts for use in printing limited-run jobs with hand-set type.

From the typefaces we use, to the presses we maintain, we know our roots with the history of Buffalo’s printers, and we are proud to preserve, promote, and innovate this great artform for a contemporary generation.