Although mechanical voting machines – those dressing rooms of democracy – are largely a thing of the past, many reading this will remember the large, manual contraptions, their satisfying click as levers were pushed down, and a familiar symbol:  little silhouettes of hands pointing to party lines.  This symbol has gone by many names throughout history, but is most commonly known today as the “printer’s fist.” 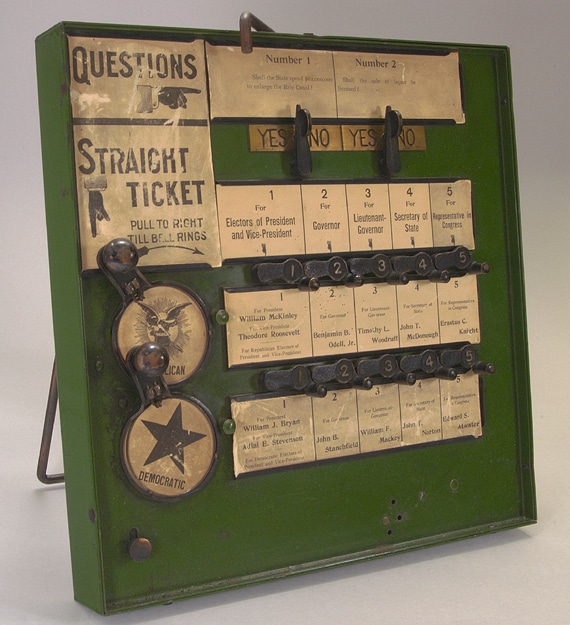 To trace a comprehensive history of this symbol, one must first recognize that is also goes by the name of manicule.  William Sherman’s “Toward a History of the Manicule” offers an excellent introduction to the origins, use and meaning of the manicule.  Sherman notes that manicule (from the Latin manicula, or “little hand”) hails from 12th century Spain (at least) as a directional device in marginalia.  But it is not until the 18th or 19th century that the manicule becomes ubiquitous shorthand (no pun intended) for “attention,” or “look here.” Sherman asserts that “printer’s fist” is printers’ slang for the symbol, used extensively in pamphlets, broadsides and signage during the golden age of letterpress printing.  Accordingly, the printer’s fist is enjoying a resurgence in the letterpress revival.  Transcending its original function as an anthropomorphic arrow, the manicule /printer’s fist has invaded pop culture–from the Beatles’ Yellow Submarine to Terry Gilliam’s Monty Python animation, to contemporary typophiles’ tattoos.

Manicule in margin of a 15th century manuscript

The essence of  the manicule / printer’s fist as universal pointer may not lie anywhere in its academic history.  Rather, it may be man’s best friend who most clearly demonstrates the impact of the pointing finger.  Recent research has shown that part of the long-standing, uncanny bond between dogs and people relates to dogs’ ability to comprehend human gestures, including pointing.  Not even our fellow primates have an innate recognition of this common, non-verbal communication.  Our interactions with dogs can teach us much about our own nature, including the archetypal power of a pointing index finger to convey direction and importance in both text and spatial interaction.